-Mobile continuation from Xanga blog PinkyGuerrero at PinkyGuerrero, this blog is Pinky, ongoing continuation at blogs Janika & Basically Clueless & PinkFeldspar, in that order.
-Most of the graphics and vids click to sources.
-Personal blog for Janika Banks. 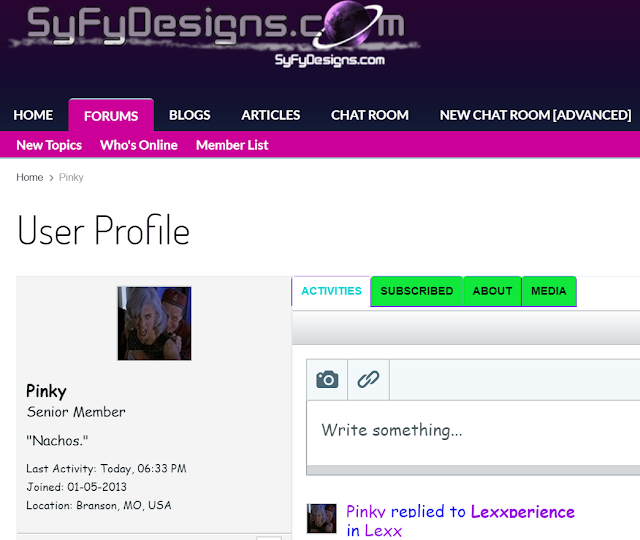 Pinky Stuff went surprisingly off the hook, which I mistook for bot hits until I realized nothing else there was being hit like that at the time. It inspired me to play...

I played around with other things, too, all click out to the threads or articles.

Big Ass Spider was fun because one of the directors and some of the cast live tweeted with us, and I shared it to SyfyDesigns.

About that time, I was also doing a The Walking Dead Live Tweet Review, which was a total blast. For awhile I was probably the only person on the internet actually doing a review based on watching fans watch the show.

I started playing around with Lexx threads and about fell over when I finally started noticing the view counts. I've never gotten this much traffic from my own fansites or on other forums, even though I'm known as a superfan around the world. This thread was the most popular for some reason.

I play around in the blog area being silly, which is fun, but my star article is a tribute to James T. Kirk, and the impact he had on my life.

Another article is a TWD think piece. I was not a zombie enthusiast but had fallen into a corrupt gang of scifi junkies called Snarkalecs, and once sucked in, I knew I'd found family.

I've done loads more on SyfyDesigns over the years, and we have a few other writers there as well, so it's fun to visit because the variety of content is incredibly flexible and the climate control keeps the spam and trolls out of the way. 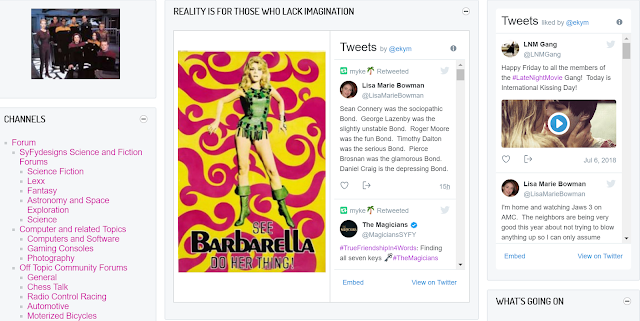 I used to have regular content schedules set up for myself, which was a great discipline tool for writing in general. I've gotten a little off track because real life slings curve balls, but I'm hoping to get back on track with much more. This next clicks to a page on my fan blog for a little more information.

My collaboration with SyfyDesigns has been very casual, and I've appreciated having a tech supported and well maintained area to home some of my content and allow me to stretch some creative braining. I have shared along the way on personal blogs that I've done much of this through lengthy recovery, and that I feel like SyfyDesigns saved me on the webs when my world crumbled apart.

Myke isn't crazy about me gushing on about him like this thing I wrote once, but he's a hawtie supernerd, and I'm glad and very grateful he's been so patient with me. I'm a lurker, not a stalker, but this is my fave pic of him through some years. This is the guy who kept me out on the webs, who kept me Lexxing, who kept me writing. Sometimes one person changes everything because they have a cool idea and they say Hey, I think you'll fit here in this thing I'm making. It's nice to fit somewhere. 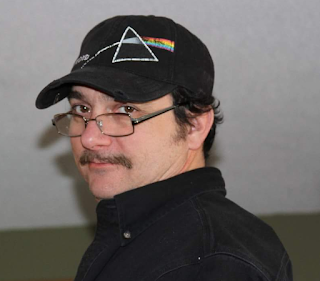 By the way, crucial info for some of you who really don't know. Myke was the guy I'd privately go to and ask "Why are they doing that?" and he'd say "Doing what?" and I'd say "Saying hi to each other every day on twitter?" And he said "Because it's nice."

Because Myke was patient with me asking weird questions and fretting over a few things I didn't yet understand, I started sharing with the whole world that I am #aspienado, and how hard it's been learning to be out here with all you guys, even though it's what I love the most. I think Myke has been especially kind to several of us, and I hope we are good for him in return.

I don't know how to end, so per my usual, here you go, float out on this one.